In preparing for my upcoming katazome class, which starts on December 8th at the Textile Center of Minnesota, I’ve been looking into some alternatives to shibugami (traditional katazome stencil paper), because, though shibugami is lovely, pleasant to cut and extremely durable, it is expensive. It can be helpful to explore alternatives, especially when beginning to learn katazome materials and techniques. Some months ago I heard about using Yupo as an alternative from Australian katazome artist, Melinda of so-meru. Since then I have tried it with some of my own work.

When I first used these Yupo stencils, I found pasting somewhat awkward because they are not reinforced.  My paste spreader (hera) was catching on points and edges of shapes in the stencil. I learned to reinforce my shibugami stencils with silk netting, called sha. John Marshall developed an innovative method which doesn’t require toxic lacquer. The netting, which is attached to the front (top) of the stencil, both stabilizes it and protects it from damage while pasting. Here is a close up of one of my reinforced stencils. You can see how fine the sha is.

The solution I came up with seems to work well so far with these Yupo stencils. I found some mosquito screen at my local hardware store. It’s made from lightweight plastic or nylon. A roll of it costs less than $10 and is enough to make a bunch of screens. I cut it to approximately the same size as my stencil (or a little smaller), and created a flexible margin around it using duct tape. The stencil goes down on the cloth first, then the screen goes over the top. Paste as usual, then mist lightly, and remove both the stencil and the screen from the surface simultaneously.

Below is a close up of the screen corner. I made the margin a bit too narrow, but since my Yupo stencil already had a rather wide margin it didn’t really matter. You need a margin for the extra paste to flow as you spread it across the stencil.

The border of the screen below is wider, and I think this works better. I used 2 pieces of duct tape, one on back, one on front, overlapping the screen by about 1/2″. 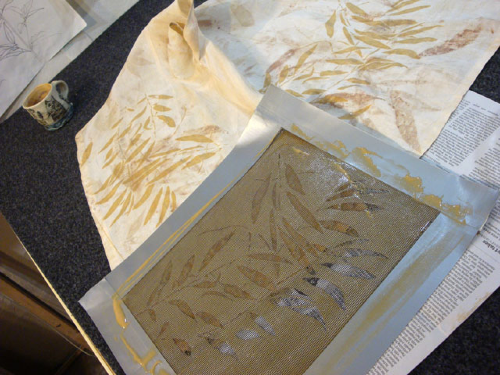 You will have to make sure your paste is of the proper consistency, i.e. not too thick. Thick paste will likely leave little squares on your cloth in the pattern of the screen. Here’s a close up of my wet paste after screening. You’ll see a few areas where I need to smooth it out a bit but generally it covers well. The cloth is linen: loosely woven, soft, with a basket weave pattern woven in, which gives it dimension and texture. (I am making curtains for the household.)

I think this is an adequate and flexible solution. Everything is waterproof and does not buckle. You can soak the paste off and forget about it (as is my normal routine) when finished pasting. If you want to paste the stencil both from the back and the front, i.e., flipping the design, you may do so, though you’ll have to wash the paste from the stencil before flipping it. I think using this technique with a registering repeat design will be more challenging; something to look into later.

Today is a misty day down at the pond, with subtle November colors under a gray sky.

I see these colors reflected in the silk and wool from my latest (and likely my last until next year) leaf bundle experiment. I had collected so many leaves I couldn’t see my work table. So I bundled them in silk and wool strips. The wool was treated first with alum. The silk had been soy sized some months ago. Simmering them in onion skin extract gave lovely rust colored edges.

The thrilling ecoprint process (as developed then shared “whirled”-wide by India Flint) transforms the fleeting beauty of these leaves to something we can savor over time.  I’ll add the strips to my personal quilt weaving, started long ago (a technique learned from Jude Hill of Spiritcloth).